Park(ing) Day is an annual worldwide event in which artists, designers, and citizens transform metered parking spaces into temporary urban parks for a day. The activity is designed to call attention to the need for more urban open space, and to generate debate about how public space is allocated, managed, and used. This year, Lake Flato designed and built a kinetic bus shelter prototype as one of the seven pop-up parks in front of 1221 Broadway.

Throughout most of the day, the shade structures on existing VIA bus stop shelters don’t actually shade the bench below it. Because of the daily and annual change in the sun’s position, the bench is only shaded for a few hours a day during the summer.  For Park(ing) Day, our team designed and built a kinetic bus shelter to address these issues and to serve as a prototype for a VIA bus shelter to be installed as part of the Dignowity Park Project by Public Space East. A dynamic bus shelter provides a more comfortable waiting environment, which leads to greater rider satisfaction and encourages use of public transit over single-occupancy vehicles. Well-designed public space leads to greater walkability in the area and safer environments that are more conducive toward active transportation for local residents. The daily movement also creates the potential for more socially interactive solar tracking if photovoltaic panels are installed on the canopy.

The shade canopy had to move from east to west to accommodate the daily movement of the sun, with the bench moving in the opposite direction to take full advantage of the moving shaded area. We explored a few options for using the bench itself as the actuator that rotates the canopy above. The rolling bench pushes a counterweight that offsets the weight of the canopy and allows users to easily adjust their position relative to the sun.

The movement of the frame was modeled and simulated in Grasshopper and Rhino to accurately place the counterweight and keep the frame balanced. The light-weight shade canopy was built with fishing line and fabric, and designed with parallel sheets woven between the lines that allow more sunlight through during winter months, and less during summer months.

This was a great opportunity to use our newly-available Lake Flato Shop across our parking lot and to utilize some of our in-house welding expertise (thank you Seema, Wayland, and Jamie!). We were able to use a few salvaged materials for our frame including an 8-foot long steel pipe as our counterweight and four yellow aviation pulleys as casters.

The frame can be disassembled into several parts for ease of transportation.  Once on site, two steel footings with rails are placed in position and two triangular steel frames are attached. A set of cross-bars with the fabric shade elements are attached to the triangular structure and tilted up into place. Our salvaged steel pipe is attached to the bottom of the rotating structure as a counterweight.  The bench is placed over the pipe, and acts as the actuator that moves the counterweight and canopy throughout the day based on the user’s preference.

The installation of the bench and shelter went relatively smoothly on Friday morning in our parking spot outside of 1221 Broadway. We recorded the movement of the canopy’s shadows in chalk as the sun and structure moved throughout the morning.

We learned a lot from our prototype and hope to refine its performance as it gets reused in different venues and reimagined as a permanent installation in Dignowity Park.  Our bus shelter produced a lot of good conversation and feedback, as well as the Most Creative Award from the Park(ing) Day judges.  The event was a great success and spurred a lot of dialogue and discussion about the possibilities of public transportation in downtown San Antonio. Thank you to Cotton, John, Heather, Serena, Alex, Seema, Catherine, Dan, Evan, Cecelia, Jamie and many others who helped us put together this fast-paced in-house installation. 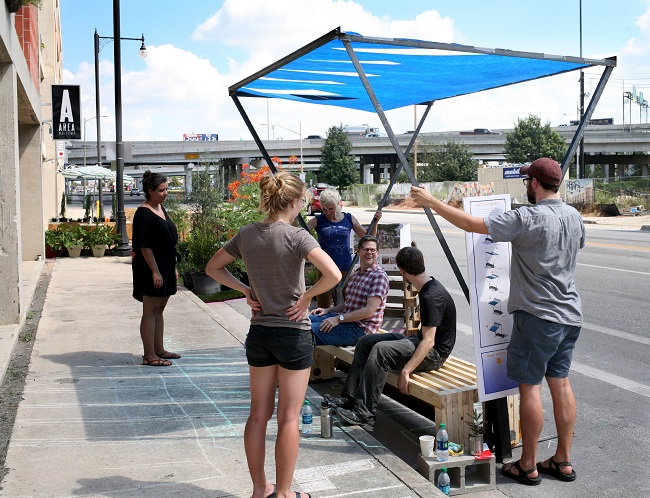