This past Sunday was a very important day for a few Lake Flatonians, it was the Downtown Kickball League 2014 Spring Championships. And boy was it a success! In the regular season we were 6-1, losing only to the undefeated Southtown Deflatables. After clinching our spot in the final four earlier in the week, we arrived at the field on Sunday cautiously optimistic about our chances to take home the coveted Samba-topped trophy. The playoffs games were located at the little spot of park at 440 Labor Street. With renovations in Hemisfair park imminent, the Downtown Kickball League has been on the search for a new home in the Downtown area. During a rescheduled game a few weeks back, we saw the potential for a great field at 440 Labor Street. The park is still in limbo between SAHA and the city, but that did not stop members of the league to put in a little elbow grease to fill in holes and plant some plants to make the field a better place to play, not just for us, but the surrounding community as well. (see: http://therivardreport.com/ask-city-can/) We look forward to giving the oft empty lot a little extra life and love in seasons to come. So, we arrive at the park, there are people unloading beer off the back of pick-up trucks and guys from B&D Ice House are unloading the BBQ (which, by the way, was amazing!). The Sweet Angel Babies had their eyes on the prize, looking forward to a rematch against our rivals in the finals. However, we quickly realized that we need to focus on the challenge in front of us. Our game against the Beer Batters turned into a nail-bitter. Tied at 6-6 at the end of regulation play, it took 3 extra innings and a sac fly by team captain Rand Pinson, to pull in the win. 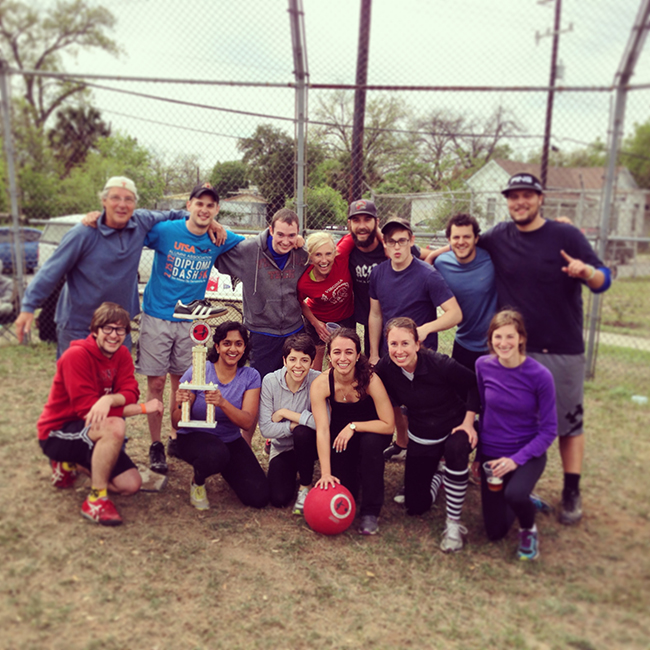 After making it through the first game of the day, we all stopped to catch our breath and filled up on beer and BBQ, while we watched the Southtown Deflatables breeze through their semi-final game. The time had come: game-time. Our play was flawless, everyone on the team had their shining moments. There were great catches, solid kicks, smart base-running, and excellent teamwork. As the innings went by, we slowly ticked up the score. Mike Long repeating the mantra, "just bunt it to third." At the end of 7, we were resoundingly victorious, 7-2. Personally, the win was great; but more important was the community that has emerged out of a simple desire by a bunch of grown-ups to play an elementary school game in San Antonio's public parks. (a big thanks to Ryan Bigley for having the vision and the organizational prowess to pull it off, http://therivardreport.com/downtown-kickball-why-not/) As a recent transport to San Antonio, I have appreciated all the new friendships that have emerged playing with and against a great group of folks. And as someone interested in the health and growth of our urban core, I am excited to have found a group of people who are willing to get out there, get their hands dirty, and participate in the life of our city and our downtown. I am looking forward to upcoming seasons, future opportunities to give back to my city, and of course more beer and barbeque. 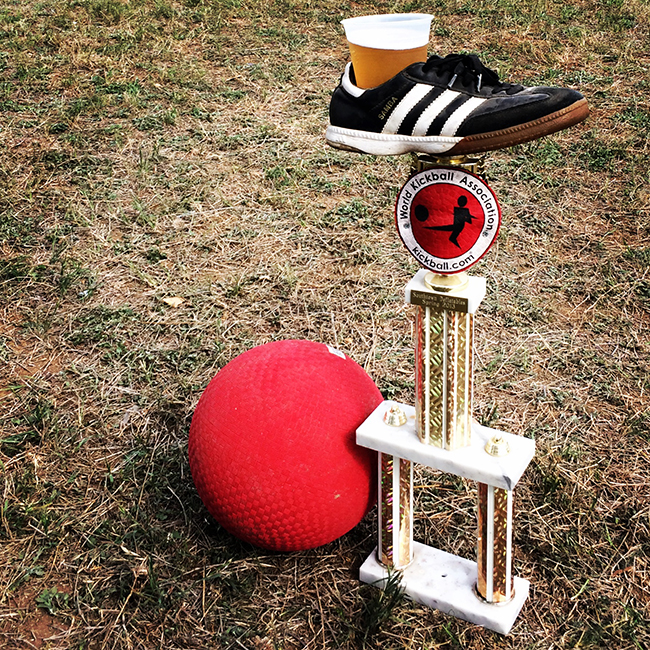