In honor of Lake Flato’s thirtieth anniversary, the Thirty Projects x Thirty Years series has been developed to explore and celebrate the firm’s history and culture of design. Published weekly, the series will highlight one project per year, starting in 1984 and ending in 2014. The projects that have been selected will give you a snapshot of the firm’s evolution as well as provide a fun and insightful collection on then and now, and ultimately, who we are today. 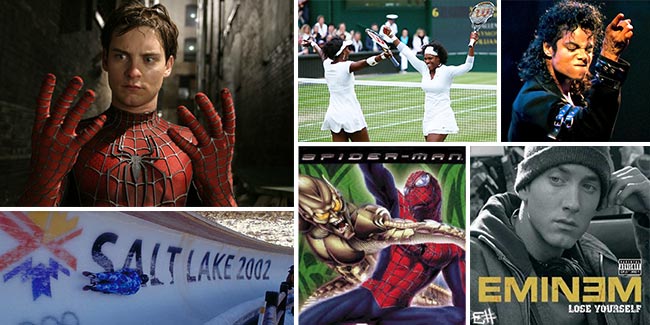 Michael Jackson receives the Artist of the Century award at the American music awards, while Eminem releases single 'Lose Yourself' from soundtrack of 8 Mile. It becomes the 1st rap song to win an Academy Award for Best Original Song. Everyone tunes into the XIX Winter Olympics in Salt Lake City, Utah. Spider-Man premieres, starring Tobey Maguire as Peter Parker/Spider-Man and Willem Dafoe as Norman Osborn/The Green Goblin. While Tobey Maguire figures out what to do with his new-fangled powers, sisters Serena and Venus Williams battle for the the 109th Wimbledon Women's Tennis singles championship while also winning the doubles tournament. Hilltop Arboretum Answers by: Joe Benjamin Project Team:  Ted Flato, Andrew Herdeg, Joe Ben “Genius”, Brandi Rickels The Hilltop Arboretum is located at the convergence of three ecosystems indigenous to the Baton Rouge area of Louisiana: boggy wetlands, scrubby highlands, and open meadows. The building has been sited and designed to frame the narrow natural site, and preserve and highlight the existing ecosystems. 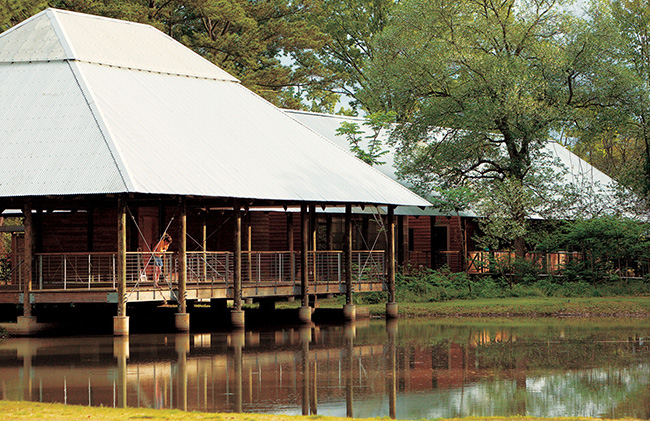 The building forms echo the simple vernacular architecture of the Louisiana low country. The long, simple building takes cues from both the agricultural pole barns as well as the formal, historic plantation homes. 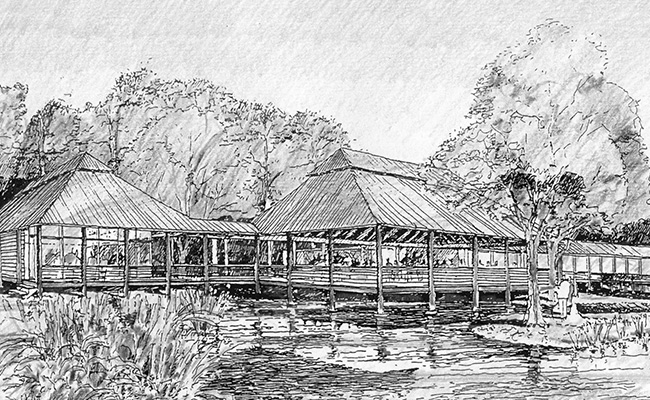 The cypress siding, lightweight framing and trusses echo architecture of the Louisiana low country. The pole structure, corrugated roofing and wood decking are reminiscent of fishing shacks dotting the bayous of the area. 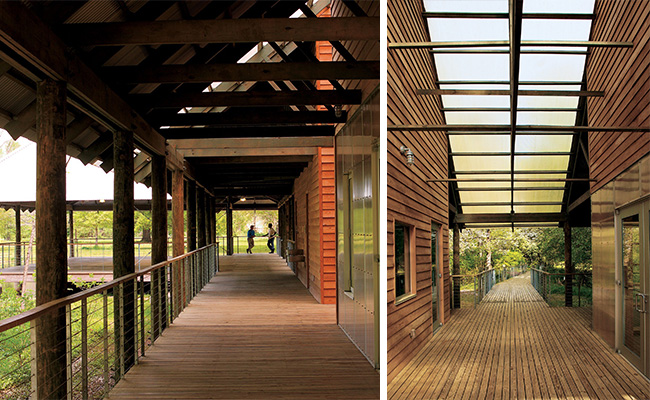 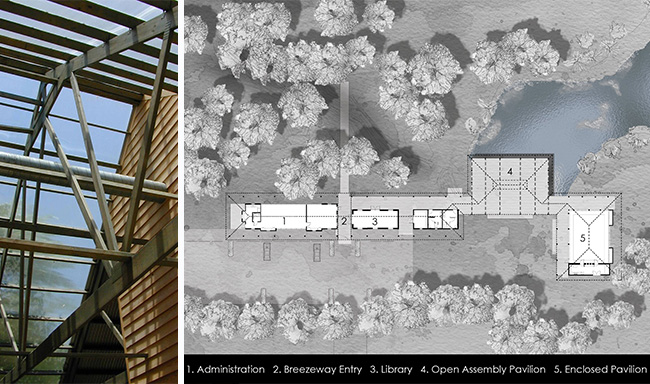 Susan Turner is a landscape architect in Baton Rouge and an old friend of David and Ted’s. She graciously included Lake|Flato on the shortlist for the project’s phase I. Most recently, we completed phase II which includes an enclosed pavilion that was part of the original master plan scheme. The project just earned LEED certification. 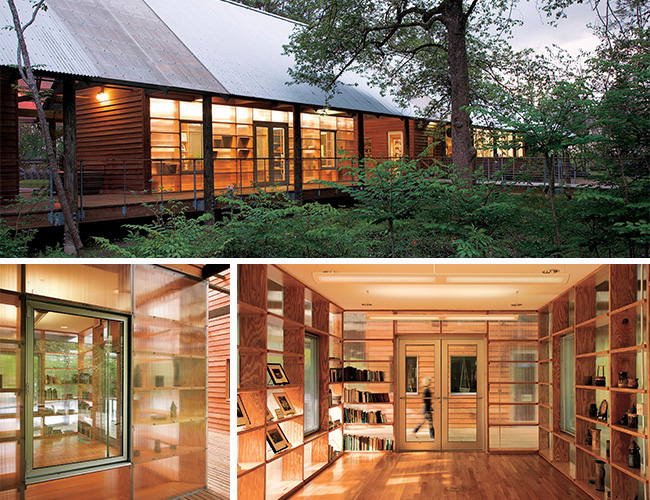 The program components—administration offices and gift shop, exhibit areas, storage and meeting space—are all housed in discreet architectural volumes and captured under one long roof protecting the open walkways. The idea of separating the program pavilions has since been captured in many other LF projects. 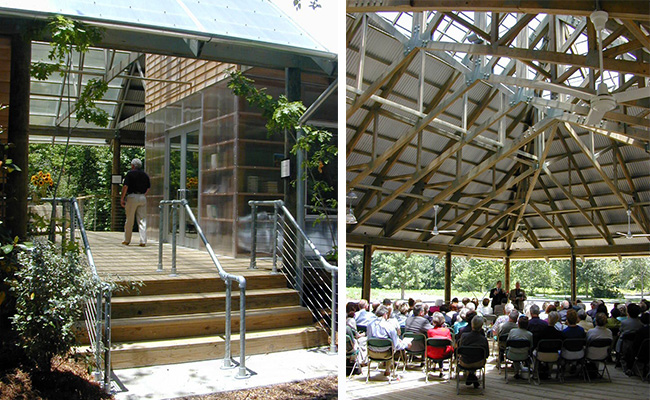 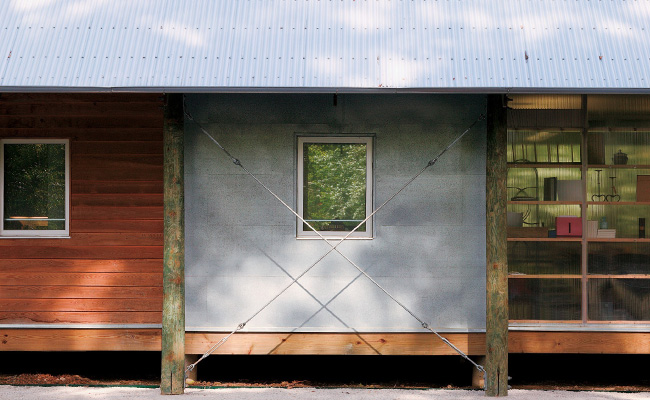 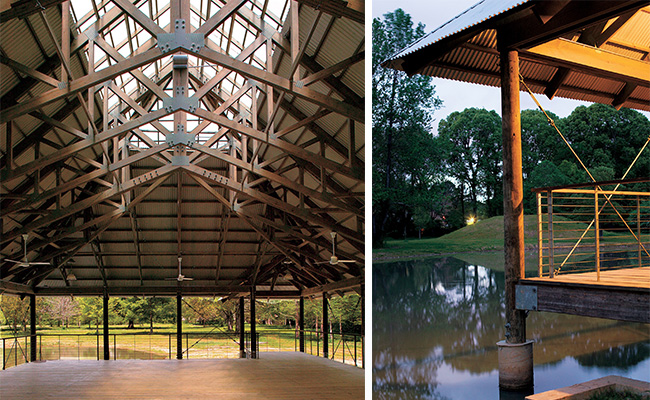 The articulation of structure was critical to the identity of the building. The pier construction, corrugated roofing, and wood decking are reminiscent of fishing shacks that dot the bayous of the area.
Tweet
Go Back